What if we told you that 3D printing is increasingly revolutionizing science? A team of researchers from Harvard University and Brigham and Women’s Hospital are rising to the challenge. Recently, they have developed a microbial ink or hydrogel to 3D print living materials. According to the researchers, the innovative material would be able to release drugs or remove chemical contaminants from the environment. This could lead to a revolution in cancer research or advanced applications in space. The results of the project were published in the journal Nature Communications in the article, Programmable microbial ink for 3D printing of living materials produced from genetically modified protein nanofibers by Duraj-Thatte et al., where they explained the development process they carried out for several years, until they were able to demonstrate the effectiveness and the opportunities offered by this technology in science.

Today we are witnessing a growing synergy between biology and materials engineering, where the implementation of additive manufacturing also comes into play as a key tool. We have already seen the success story of the University of Colorado, which has developed a 3D printable material capable of mimicking complex biological tissues. Or the scientists who created a new bio-ink from ulvan, a type of seaweed, which they believe promotes wound healing. This time, experts at Harvard University have created programmable microbial inks from genetically modified protein nanofibers. 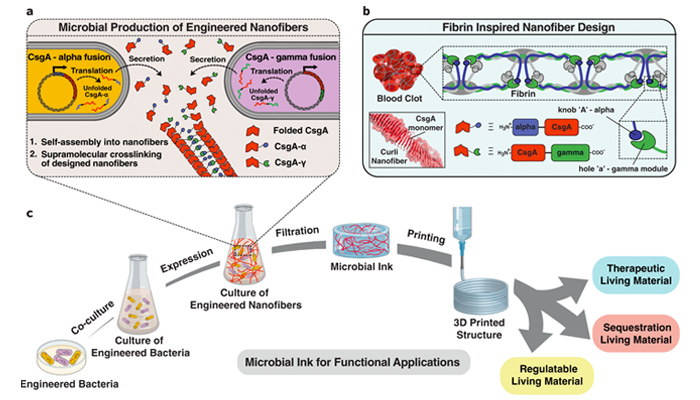 With the idea in mind, the researchers incorporated the bacteria Escherichia coli (also known as E. coli) and modified protein nanofibers into the ink. E.coli is a bacterium belonging to the Enterobacteriaceae family, which is found in the microbiota of the gastrointestinal tract of homeothermic animals, as well as in humans. A mixture of alginate and E. coli was 3D printed on a calcium chloride surface. Indeed, the alginate molecules crosslink on this basis to form a solidified gel. Regarding the manufacturing process itself, in the published article the researchers commented, “Although inkjet printing, contact printing, screen printing, and lithographic techniques have been explored to print microbes, extrusion bioprinting has become one of the most widely used techniques due to its simplicity, its compatibility with a variety of bioinks and its cost-effectiveness. instrumentation.”

Throughout the research process, the experts encountered a number of challenges. One of them concerned the properties of living materials to be used in the successful 3D printing process. For this, bioinks had to meet two main requirements: low viscosity for extrusion, but at the same time high enough to retain their shape after printing. For this, the scientists were inspired by fibrin, a fibrillar protein capable of forming blood clots through three-dimensional networks.

There is still a long way to go in the development of living materials, although the future is bright. Indeed, the Harvard team claims that it could be used in research against certain cancers, or even to supply future colonies on Mars. You can find more information about the project in the official publication HERE.

What do you think of the microbial ink from Harvard University and Brigham and Women’s Hospital? Let us know in a comment below or on our Linkedin, Facebook and Twitter pages! Don’t forget to sign up for our free weekly newsletter here, the latest 3D printing news straight to your inbox! You can also find all of our videos on our YouTube channel.