As he becomes a father for the first time, AJ Titus also releases his first book based on fatherhood. The first author recently published the story of the lessons he learned from his father and how those fundamentals shaped his approach to business, leadership and what he values ​​most. AJ Titus is President of United Franchise Group, the world’s leading contractor, and Signarama, the world’s largest sign and graphics franchise. He and his wife, Laura Titus, had their first child in April.

The list: lessons from a fatheravailable on Amazon, passes on 18 lessons from his father, United Franchise Group founder and CEO Ray Titus, who shared The list of ideas as he drove young AJ to school.

At 145 pages, the book is designed so that its lessons can be absorbed and applied quickly and easily, connecting the reader to The list and the reasons why it resonates through the generations. 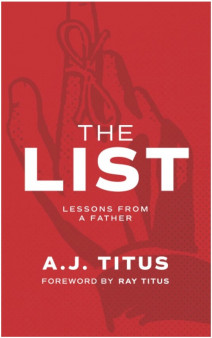 “The goal is to pay it forward,” Titus said. “The 18 lessons are quick but straight to things that help you and things that I’ve been thinking about all my life. The list has motivated me since I can remember, and I decided that if I could write something that would help others, including my daughter, I wanted to do it. I want to give back to him the same way my father gave back to me.

AJ Titus’ father, Ray Titus, served as a role model for his son in work and in life. In addition to founding United Franchise Group, he is an accomplished speaker and author with six published books. “The list went from me sharing important basics about life, with my growing family, to now AJ sharing it with everyone. He took it to a whole new level,” said Ray Titus, “Seeing The list through AJ’s eyes opened mine to how these simple lessons have enriched our time together.

The list: lessons from a father also includes wisdom from AJ’s grandfather and former United Franchise Group Managing Director, JJ Prendamano. AJ remembers being late for a meeting with his grandfather early in his career. When he arrived, his grandfather wrote “Respect for Time” on a $5 bill and tore the money in half.

“You will get the other half if you respect other people’s time,” his grandfather said. A memorable display for the young leader on time is money, the kind of thinking that makes The list, valuable for budding leaders and lifelong learners, passed down from father to son, for parents, coaches and business mentors. And, if you’re wondering, yes, AJ still has the $5 bill.